In the light of any firearm related murder, the news returns to a handful of disgusting tropes. The first is the assumption that the murderer is a bigoted white man, followed by the accusation of right wing extremism, and always, always, always, followed up by a call to do something about those easily accessible scary assault weapons (a made up term to instill fear). One self purported ‘gun owning’ “journalist” called for a ban on all “AR-14’s.” He meant AR-15, as the Ar-14 is an a score model not known to… Anyone….But while gun owners roll our eyes at the ignorance spewed from the media, and even from the White House (the president recently said that the Orlando shooter had a “Glock, which had lots of clips in it…”How did this anomaly work at all?!?), as we grind our teeth at the absurd calls for the ineffective and unconstitutional bans on certain firearm types, we are left to shout at our TV’s whenever the talking heads imply that the second amendment has anything to do with hunting. The anti-gun crowd insistently repeat their drivel as if they have any concept of what they are talking about. But in the middle we have those who don’t know firearms, who didn’t know to laugh mercilessly at Tom Brokaw’s ignorant AR-14 comment, who might think that the ‘common sense gun control’ measures sound reasonable, and that couldn’t tell the difference for between a shotgun or a rifle: this post is for those people.

If we are to have a real conversation about guns, we should at least all have some idea what we’re talking about.  I don’t have any resentment to you if you are ignorant: not knowing something has no shame…. Until you try to use your ignorance as a weapon, then I have a problem.

So we are going talk about the basics of guns for a few minutes. There are literally tens of thousands of firearm types, models, caliber, etc. Even the most knowledgeable experts can find themselves ignorant in certain areas. So I’ll be speaking in generalities. There are always exceptions to these generalities (with tens of thousands of gun types, of course there are), but let those go, mister internet warrior 🙂 – I’m giving a rundown of firearm basics to those who don’t know.

If this feels overwhelming, keep with it. I’ll try to talk in basic terms as much as possible, but even for those of us in ‘the know,’ the substantial quantity of information can be overwhelming. Be patient, reread, and even ask questions!

I like to joke that I was born with a rifle in my hands. I don’t think that I was actually, but I don’t remember for sure. We’ll have to wait on my mom to weigh in on the topic. I became a NRA Certified instructor for basic courses in 2007, and have maintained those certifications since. I’ve been the range master for literally millions of rounds fired: and never had an accident on one of my ranges. I’ve studied independently most of my adult life, being fascinated by the topic. I was a police officer, and qualified top of my academy class with the tactical shot gun, and in the top 3 with a handgun. While I am not an handgun instructor, I am a gifted shot. Despite these things, I still feel like a 3 year old in an advanced physics course when my father-in-law and I talk: he’s been doing this a lot longer than me, and with much more gusto… And even he finds areas of ignorance on this topic: it’s a massive amount of information!

Let’s define some terms: these may or may not be commonly used terms, but for the sake of our conversation, these are the baseline.

The first class of firearms are called ‘Single shot‘ firearms. These guns need to be reloaded after each shot. These are popular types of guns for some hunters and for learning how to shoot. On my ranges, I use single shot guns almost exclusively as it keeps a person from firing rapidly and learning sloppy habits.

The second class of firearms are called “semi-automatic” firearms. Almost without exception, when you hear someone in public office or in media talking about ‘automatic’ guns, they are referring to semi-automatic guns (but ‘semi’ makes it sound less scary). The “automatic” part means that the gun re-loads itself after each shot, assuming that it has ammunition to use. The ‘semi’ part means that, like the single shot, the trigger must be pulled once for every shot fired. You cannot just hold down the trigger and ‘spray bullets,’ as is commonly claimed. This type of firearm is by far the preferred firearm for most applications: including hunting, personal defense, target shooting, and shooting sports.

The terms “machine gun” and “assault rifle” are exclusive to the fully-automatic class of firearm: these are legal terms and cannot rightly be applied to any other class

These guns are primarily used by military and para-military forces. Some hobby shooters have them as well, but these guns were made effectively illegal during prohibition. It takes tens of thousands of dollars to become licensed to own an automatic weapon. Whenever you hear someone say that a shooter used a “machine gun” or “assault rifle” to commit a crime, you can be sure that these terms are used incorrectly. If you hear a talking head say that anyone can obtain a “deadly assault rifle” without a background check or through some sort of loophole, you can be sure that that talking head is talking out of their backside. These guns are, if for cost reasons alone, so prohibitive as to be nearly impossible for even the most avid collector to obtain. Golly, I’d love a fully automatic gun… But I can’t afford the roughly $25,000 in licensing and about the same amount in purchasing the gun itself… (Sigh)… Maybe when I’m rich… (A guy can dream, right?)

Firearm types and those common uses:
There are 3 key types of firearms – the handgun, the rifle and the shotgun.

Handguns are great fun for the target shooter, but less than ideal for the hunter. Many hunters carry a backup handgun in the event that they are charged by an aggressive or wounded animal and need to defend themselves in shorter range. However, the primary use of handguns has always been as defensive weapons. With some exceptions, handguns are generally considered short range weapons. accuracy begins to drop substantially outside of about 20 yards for all but the best shooters. The handgun is subdivided into three common categories:

Shotguns great for many uses. They are my preferred target gun. Generally, shotguns are the best guns for hunting small game including rabbit, squirrel, pheasant, and all other types of birds. By simply changing the ammunition type in a shotgun, they can also be used effectively against some large game such as deer. Shotguns provide excellent defensive use for short to mid range distances. Depending on the ammunition type, shotguns lose effectiveness between 50 and 100 yards.

Unlike handguns, shotguns are considered a ‘long gun.’ as the name suggests, they are longer than handguns. Generally a shotgun is brought to the shoulder and uses both hands to fire. There are both single shot and semi-automatic shotguns available to the public (fully-automatic exist as well, but are functionally illegal in the US, as previously discussed). These can have several different looks:

Each of the above guns is functionally similar. The top is a single shot gun, while both of the bottom two are semi-automatic shotguns. They are cosmetically different, having different intended uses, but (the bottom two particularly) are functionally the same.

The shotgun, unlike both the handgun and the rifle, generally has a smooth bore, which is the inside of the gun’s barrel. This decreases the effective range, but increases the variability of ammunition from a single gun. A single shotgun can shoot dozens of small BBs, called shot, in one round (bird-shot is the smallest, and holds the greatest amount), or can shoot eight or nine 9mm ball bearings (called buck-shot, used often for deer hunting, as a defensive ammunition, and is a favorite of law enforcement), or can shoot a single lead slug which can be almost 18mm in diameter (used for big-game hunting and defensive use: slugs have the greatest range of all shotgun ammunition) – all without any modifications to the gun itself, but simply by changing out the ammunition! This versatility makes the shotgun a favorite for many.

Rifles are great for all uses. They are a lot of fun for target shooters. For hunting large game, including deer, elk, bear, and large cats, the rifle is the ideal gun. For defensive purposes, this type of gun is the best all around weapon. These can also be used for offensive purposes. The number of rifle types is substantial, and they can be modified to fit the specific needs of their particular shooter. Rifle’s have the longest effective range of the three gun types. I can think of one particular sniper shot, in Afghanistan, which was over a mile! Even excellent shooters, however, typically lose effectiveness outside of a couple hundred yards, depending on the gun.

Like the shotgun, the rifle is a long gun. And like the handgun, the rifle has a twisted bore, called ‘rifling,’ which is were it gets its name. This twisting spins the bullet as it leaves the gun, giving increased accuracy and range vs smooth bored guns. The advent of rifling changed history, and the Kentucky Long Rifle, known for its accuracy and range, helped to win the revolutionary war.

Rifles, like handguns, (but unlike shotguns) shoot bullets, rather than shot (varied sizes of BBs) or slugs. 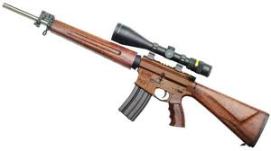 But the truth is that the 3 guns above are all functionally identical. The top image has hundreds (or thousands) of dollars worth of extra ‘stuff’ on it to customize it for the owner, the second image is what one might call the “stock options” and the third has replaced the grips and stock with wood finished parts for a pleasant look (I prefer the wood look myself), but all 3 are semi-automatic, AR-15 rifles.

So we see that what a gun LOOKS like is far less important that what the media tells us. If we listened to the talking heads, the gun on top would be the most dangerous by far! But that, again, shows either the ignorance or the dishonesty of the agenda-driven media and the politicians pushing for “common-sense control measures.”